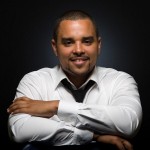 “If the church only serves its members it’s not a church, it’s a club.” This is a statement that drives my leadership and all of the initiatives of our local church. At the church I serve we have been working hard on making sure we serve with Matthew 25 in mind. One of those points in particular is “I was in prison and you came to visit me.” Matt. 25:36 There are probably hundreds of prison ministry initiatives in North America but I don’t think there are any like the one we have seen God build in Columbus, OH.

A modest 20-30 inmates attended my first visit to one of the correctional institutions in mid-Ohio. I was curious if there was a limit on how many could attend and when I found out there was none my curiosity went in another direction. If every inmate can come to a Bible study or worship experience in the prison then why didn’t they come? I began to inquire about the timing and format until I concluded that we could make some adjustments that would change the way we engaged the prison population.

Each weekend and on Wednesdays we were bringing in children from around our city for a hot meal and positive programming. Many of them had adults in their lives that were incarcerated. I knew that if we could somehow close and stand in the gap we could really make a difference in their lives. The food and the visitation just wasn’t enough. If it were really powerful I believed that the whole prison would be talking about it and we’d get droves of people pressing in to hear the Word of God. My prayer was simple: Lord, show me how to win the hearts of these families for your Kingdom. God began to speak to me and to the leaders of Central Church and we moved forward in faith. We decided that every guest speaker that would come to Central would also have to go to the prison and deliver a message. In many instances the guest speakers would go to two prisons in a single weekend. Not one of them ever came out without saying, “I’ve never seen anything like this before.” We were on to something but we weren’t there yet.

I registered for the CALLED convention and received an email about a “Shark Tank” ministry funding opportunity. In faith the church paid for our Prison Ministry leader to fly to Texas and meet me in Austin to present. At the end of the night when the judges announced that we were the $20,000.00 winners it was confirmation that God was about to do something with our ministry that we had praying for all along. 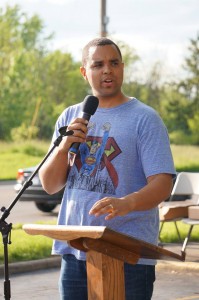 When the State Director for the Department of Corrections wrote to congratulate us on our win via Facebook I jumped at the opportunity to make a request. I asked for more creative freedom to serve and he identified the platform for us to move forward with our plans. We realized we had to do things differently if we wanted to reach the thousands of inmates that didn’t even know we were available to them. We started doing more than just scheduling preachers. We would take our praise teams and band and choir members as well as our special musical guests. We started planning for our prison ministry with as much energy as we were putting into our Sabbath worship experience at the church. Things began to shift. Where we saw 20-30 we now saw 200-300 but it still wasn’t enough. What about all of the others?

We met with the Chaplain of the women’s prison and the warden and proposed to partner with them on programming other than worship. We offered to provide facilitators for parenting and we chose to use the Adventist Home and Child Guidance books as textbooks. We offered to facilitate group life skills programming and we opted to use Mind, Character and Personality. We tapped into resources that typically sit on shelves collecting dust in our churches and to the inmates and the prison system it was like striking gold in a deep, dark mine.

Inmates began writing and we would have our Sensational Seniors and children write them back with prayers. We made sure every inmate had a Bible. We began receiving visits from recently released individuals and they would not come alone. One week two gentlemen and their families walked into church and before I got up to preach I received a note, “Pastor, the two men that just came in a little bit ago were released from prison recently and they brought their families with them.” I would be at dinner with friends and people would come up to me and say, “Pastor, I know you don’t remember me but I was at the prison and your church helped me get my life together.” These powerful encounters have been happening more and more and I recognize that God has been orchestrating something special.

In our preparation for a powerful move of God in the prison our church began to change. Children and adults began to visit our services because their loved ones on the inside wrote them or called them to tell them about the revival that was taking place in the prison with our ministry. Even recently I received a long email from a mother whose son will spend the next 20 years in prison here. She wrote to let me know that we are making a difference in his life and she wanted to express her gratitude for the work of the Holy Spirit through us.

On any given Sabbath we have 4 worship services. 3 are on our main campus at the church and 1 is in the prison. When we show up for worship at the prison now we have 600-700 people in attendance. Some weekends those that work there come in even on their days off because they want to be a part of what’s taking place. It is a powerful experience and it all started because we wanted to reach people that are often considered unreachable.

I am often asked how we are able to get so many people to come to a prison ministry like this and I don’t have most of the answers but I do have these:

1. Ask God to show you how to change everything you are doing that doesn’t work and do it HIS way.

2. Put as much energy in planning your prison ministry as you do your church ministry. In time the inmates will seem more like members than prisoners.

3. Do not allow your guest musicians or preachers feel that church is their main priority. Make sure you schedule your guests with the prison ministry in mind. 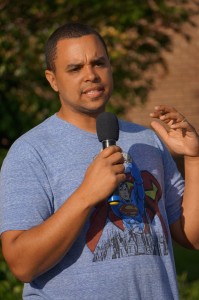 We have brought in celebrities and world class instrumentalists, vocalists, preaches and lecturers. All of this communicates a single message: You are important to us! Isn’t that exactly what Christ communicated to His followers? I can’t tell you how many tears have been shed by our team and our guests but this process doesn’t just change the inmates, it changes us. One of the most unbelievable moments I’ve had at the prison happened after I went in to visit after I was in a horrific, nearly fatal car accident. As I walked up to the gymnasium it was silent until I opened the door and stepped inside. The whole place burst into applause and cheers and I stood there overwhelmed with emotion. One of the officials went to the mic and said, “Pastor Boston, when we saw your accident on the news we called the prison together in this place and we all prayed over you. Seeing you stand here today gives us all hope because you are an answer to our prayers.” Even as I write this article I am in tears over the love they showed towards me. When the Lord returns I want to know that I led my church to be a part of this sacred work so that He will find us faithful in the end.

We have reached thousands of people connected to the prison system with the good news of Christ’s love and His soon coming just because we dared to do something differently. I believe that in time we will become the spiritual leaders of the entire prison system in the state. Until that time comes we will keep pressing forward and trusting that God will always make a way for us to do amazing things if we just step out to serve others and not ourselves. I would like to challenge you to go back to your board and ministry leaders and ask them, “What do we need to do to change the game?” Everywhere Jesus went throngs of people were touched by His ministry. I don’t think we are hitting the mark if people are not drawn to our work for the Lord. Our lives in Columbus will not be the same because of this work. The moment things changed here happened when we stopped working on “us” and started working for those that were not in our pews. The tithe and offering will come. The attendance will come. The laborers will come. These things will come but first, you must GO!