A Movement Must Have Momentum 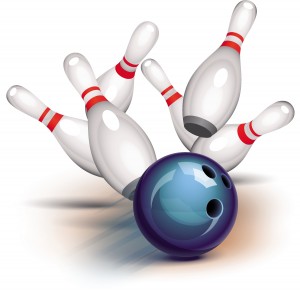 My wife and I have hosted two boys from an orphanage in Latvia over the past Christmas and summer. We discovered that these boys enjoy bowling. The younger boy (age 5 the first time he came) has some trouble getting the ball down the lane to hit any of the pins. The challenge is not with the start. In fact, in the beginning the ball often is rolling nicely down the lane. But it soon swerves off course and ends up in the gutter. He gets frustrated, but doesn’t give up. The results are the same every time. The problem is the ball’s lack of momentum.

There is an obvious parallel between the bowling experience of our five year old and the church. We have sound doctrine. This gets the ball headed straight down the lane.  However, if we lack sufficient momentum, there is a danger that the ball could end up in the gutter, rather than producing a strike. When distracted by issues inside the church, the ball can swerve either to the left or the right and end up in the gutter as well. The momentum of the church is evangelism. This involves gaining new territory for Christ through church planting. Peter Wagner states, “Without exception, the growing denominations have been those that stress church planting” (Wagner, C. P. (1990). Planting Churches for a Greater Harvest. Ventura, CA: Regal, p. 20). What is the momentum of the Seventh-day Adventist Church in the North American Division

Between 2011-2014, there was an average net increase of 57 churches and companies throughout the Division. This adds up to less than one new company/church per conference annually. The number of churches planted is actually higher than 57, as a certain number of churches close every year. Additionally, some groups such as refugee church plants and house churches may not qualify for company/church status or take much longer to do so. With these factors considered, it is safe to say that approximately 100 church plants are taking place every year. This is something to praise the Lord for…but can we call it a movement? Is there enough momentum to get the ball down the lane?

There are a couple of ways to calculate the rate of growth. The first is by percentage. A church planting rate of three percent will keep pace with the population growth. This also will account for a certain number of church closures. With 6277 churches and companies in the North American Division at the end of 2014, this means that 188 church plants should be launched every year. However, to be considered a movement, we should be gaining ground rather than simply keeping pace. For this to happen, the church planting rate should be closer to six percent. Based on this rate, we should be planting 376 churches annually.

The second way to calculate our rate of growth is by considering a minimum goal for the number of Adventist churches needed when compared to the population. Ellen White shares an enormous vision, “I saw jets of light shining from cities and villages, and from high places and low places of the earth. God’s word was obeyed, and as a result there were memorials for Him in every city and village. His truth was proclaimed throughout the world.” (Testimonies, volume 7, p. 105). Although falling short of this grand panorama of the future, we can start with a minimum goal of one Adventist church for every 25,000 people. Based on this rate and a population in the North American Division of more than 354 million, we would need 14,162 churches and companies compared with the 6277 that we have today. This means that we should more than double the churches that we already have!

Another consideration when looking at statistics like this is that the North American Division population continues to increase. Currently 14,162 churches are needed, but this number will keep climbing. To keep up with the population growth and have a ratio of one church for every 25,000 people, 184 churches would need to be planted annually. This accounts for the closure of around 20 churches (which is probably a low estimate). If progress is to be made, more than 184 churches need to be planted every year.

Where to we go from here? At the 2015 year-end meetings for the North American Division, an initiative was launched entitled Plant1000. The goal is to plant 200 churches each year over the next five years. The annual church planting rate breaks down to three church plants in conferences with less that 15,000 members and four church plants in conferences with more than 15,000 members. If this minimum threshold is reached by every conference, many more than 200 church plants will be launched every year. There are several conferences that plant at greater rates than four per year already. It is anticipated that this would continue. A broad based commitment could see the planting rate jump to 250-300 church plants per year! This would produce the momentum necessary for the Adventist Church to once again truly be considered a movement in the North American Division.

How can the vision become a reality? The North American Division has voted financial support for 200 church plants annually. A total of $10,000 will be provided for new church plants submitted by local conferences—three every year from conferences with less than 15,000 members, and four for conferences with more than 15,000 members. These funds are the result of the financial participation of the General Conference, North American Division, Unions, Conferences, and some donors. This is a great first step, demonstrating that what is valued is funded. The application for receiving these funds is through the North American Division and the deadline for 2016 funding is May 1, 2016.

Obviously, hiring over 200 church planters is not economically feasible. How then can this vision be accomplished? Matthew 9:38 reminds us that the “harvest is truly plentiful, but the laborers are few.” In order to reach the abundant and ever growing harvest, more laborers must step forward. It will be essential to engage lay members as church planters. Pastors can take on the role of “talent scout” and “coach,” providing key support for successful lay led church plants. Many conferences throughout the Division have been following this method over the past decade with excellent results: Texas, Carolina, Florida, and Wisconsin, to name a few. Florida has developed an extensive volunteer lay pastor program (VLP) that can be a great model for lay-led church planting and lay-led established churches.  Florida currently has 89 lay pastors engaged in their VLP program.

Vision casting and ongoing support are essential for an effective movement of church planting. To support the vision of planting 1000 churches in the next five years, 200 per year, the North American Division will lead an annual Church Planter’s Boot Camp to equip, empower, asses needs, and help Church Planters with a coaching network. This year it will be held in Camp Kulaqua, Florida from April 28 – May 1, 2016. For more info visit www.nadchurchplant.org, after January 1, 2016. Regional SEEDS Church Planting Conferences (12+ every year) take place throughout the North American Division. Visit nadei.org to view upcoming events or email Candy Clark at clarkc@andrews.edu. If you would like to sponsor a SEEDS event in your territory, please contact Tom L. Evans at tevans@andrews.edu.